Imagine a continent where citizens can easily and conveniently access any case, legislation or legal amendment that they desire without having to pay or worse yet, bribe anybody. In addition, imagine diverse courts where both women and men are fairly represented exemplifying how we have moved past the patriarchal and unequal nature of most of our societies.

This is the type of vision that AfricanLII and the Gender in the judiciary project at DGRU envision.

Over the past few months, AfricanLII and DGRU have embarked upon a joint research project which aims to demonstrate the advantages of both Open Access to law and having a gender-balanced judiciary. Our project serves three purposes.

Firstly, our study seeks to fill an important gap in the research by focusing on the sub-Saharan and East African region. This is novel because studies examining the relationship between gender balance on judiciaries, and the quality of judgments produced, typically limit their focus to the Western European and North American regions.

Secondly, by using AfricanLII for research purposes, we aim to add to the traditional arguments for the importance of Open Access to Law, which tend to focus on access to justice, the rule of law, and the need for case reporting.

Our study is a practical example of how Open Access to law can unlock opportunities for legal research in previously inaccessible areas.

What does of passion to do with free access to law and gender representation on the bench you might ask?

What if we could prove that the benefits of having more women judges on our courts goes way beyond just because we want to be an equal society. Having more women on the courts is symbolic, it creates confidence in the judiciary, and it reminds us that gender equity needs to be a goal that is alive even in our courts but that is not all. What if we had a way to prove what socio-legal academics have been arguing for the past few years? That having more women on the bench not only improves the quality of deliberation, but also the quality of justice handed down.

Our preliminary study of 44 cases that have gone on appeal in Botswana, South Africa, Tanzania, Uganda, Kenya, Zambia and Zimbabwe revealed interesting results. These countries also happen to be the ones with established legal Information Institutes (LIIs) and thus the data we collected is all available online - for free. Moreover, unlike traditional law reports, the data was more comprehensive, easy-to-use and searchable.

Of the 44 cases, 27 had been decided by a panel of both men and women judges and 17 were decided to solely males. The following charts summarise our findings. 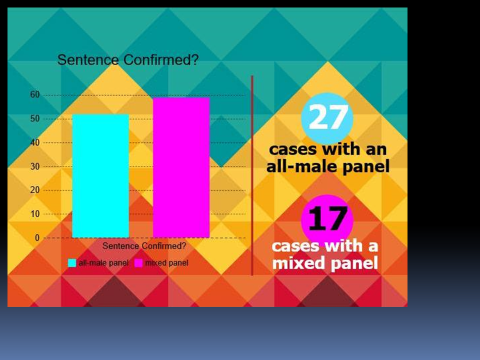 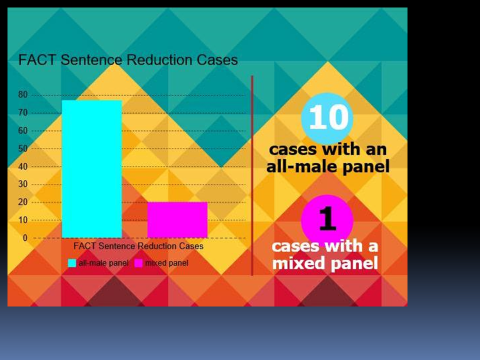 That is a sizeable discrepancy, but a further disaggregation to see the reason for the decision speaks volumes. Decisions were deemed to be ‘fact-based’ if the sentence was reduced as a result of a different interpretation of the facts, specifically, if the appeal court had found for the defence of provocation where the trial court hadn’t. Decisions were deemed ‘law-based’ if the sentence was reduced because the trial judge had erred in the law: for example, not following the correct sentencing guidelines. This distinction is important: ‘fact-based’ reductions are predominantly the result of differing perceptions of what counts as provocation, and therefore are far more likely to be influenced by the gender of the judge.

In essence all male panels were three times as likely to reduce sentences for perpetrators of crimes of passion based on how they interpreted what happened-not on for an error in law.

Moreover, all male panels were more likely to reduce the sentence if the man had killed a woman (62%) than if he had killed a fellow man (37%).

A quote from a Kenyan case exemplifies this approach:

“She made him feel unloved. She made him feel that he was not good enough for her. She made it clear that IP Timto was her man, although Timto denied it….appellant had been subjected to humiliations over a number of years… the rude and derogatory answers he got finally amounted to the proverbial last straw which broke the camel's back.” (Stephen Kipkeror Cheboi v Republic [2002] eKLR)

Our primary findings have shown the gendered nature of judging in particular to crimes of passion. The findings above demonstrate the role women play in not only ensuring a fair outcome for the victims but also ensuring that those who commit heinous crimes get their just deserts. We acknowledge that this research is limited in that it relied on cases reported on the LIIs. We also concede that it is limited in thematic areas, countries and courts.

However, it holds so much promise. It places the spotlight on how different judges treat crimes of passion depending on whether the victim is a lover who scorned the perpetrator or an adversary in a quarrel. It underscores the usefulness of free access to law by exhibiting another area where free information could be used. Finally, it foregrounds what could be ground-breaking research that provides valid evidence of another reason why we should be striving to ensure gender equality in our judiciaries.

If this is not enough to encourage you to jump onto the free access to law movement…I don’t know what will be.

Tabeth Masengu
More about the author