How closure of TV stations has narrowed democratic space in Kenya

The closure of three leading television stations on January 30 2018 by the Communications Authority of Kenya sparked a huge outcry. 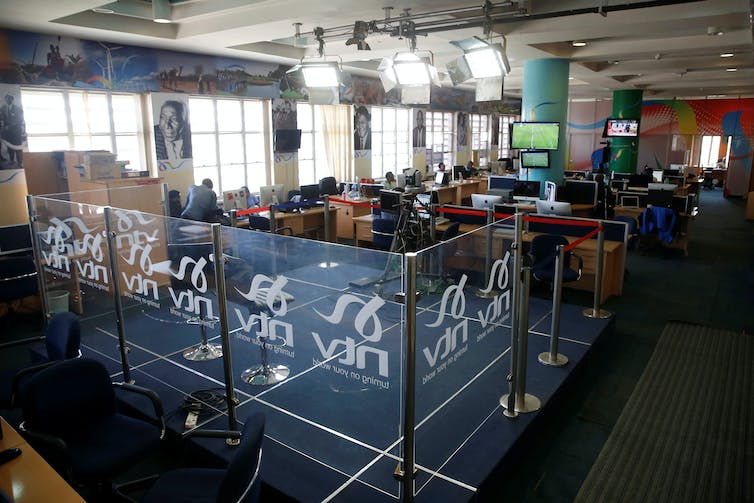 Three of Kenya’s leading broadcasters remained shut for a week. Two have since been allowed back on air.         Baz Ratner/Reuters

The closure of three leading television stations on January 30 2018 by the Communications Authority of Kenya sparked a huge outcry.

The move came as the local media was preparing to cover the controversial “swearing-in” of opposition chief Raila Odinga as the “people’s president”.

On February 1, human rights activist Okiya Omtata approached the High Court to challenge the shutdown. Later that day, the court ruled against the Communication Authority, and ordered that the stations be allowed to start broadcasting again. A week later the authority allowed two of the stations - NTV and KTN News - to resume broadcasting. The third - Citizen TV - is still off air.

This move to interfere with the work of independent journalists is a bad sign for media freedom in Kenya. The media has been caught up in the political warfare between the ruling Jubilee Party and the opposition’s National Super Alliance, and the situation does not seem likely to improve.

Genesis of a shutdown

Despite a long and protracted election cycle that started in late 2016 Kenya has enjoyed relative calm. Citizens kept the peace even after a decision by the Supreme Court to uphold Uhuru Kenyatta’s election to office on October 26 2017. His main challenger, Odinga, boycotted the poll.

While the Supreme Court decision may have addressed the legal question, the political question of legitimacy was never resolved.

Until now, political discussions around the legitimacy question has been vibrant with the media providing a platform for debates. But there have also been undercurrents around the media’s role in debating and covering the election and ensuing controversies: Kenya’s press has been accused of abandoning its role as watchdog by pandering to political interests and engaging in partisan reporting.

It was no wonder then that recent events placed the local press between the sitting government and a popular opposition and forced it to pick sides.

The latest troubles started in December 2017 when National Super Alliance announced the launch of the People’s Assembly which it said would culminate in Odinga’s swearing-in as the “people’s president”.

The swearing-in, which was postponed several times, has been widely debated and analysed. One thing that it has brought to the fore is role of the media in political contests.

The role of the press

The press must function without undue influence from any quarters. This is particularly true because one of its main roles is to protect the public interest. In a country like Kenya where the people are politically divided along party and ethnic lines, the media must guard this role very seriously.

Scholars such as American political scientist Edward Banfield have argued that any media that purports to act in the  public interest must be grounded in freedom, justice, equality, and order.

And speaking specifically of press freedom, it is the unrestricted right to publish or broadcast content without needing to get approval from either the state or any other agent with influence.

But this right comes with responsibilities. Because it acts in the public interest the press is expected to be reliable, objective, and ever watchful for breaches of the public trust.

The question is: where the television stations that were shut down in breach of these responsibilities? The stations stand by their assertion that they were fulfilling their responsibility to cover the news and to share critical information with the public.

And given that political, social and judicial messages would mean little if they were not communicated to the public, the democratic process demands that communication channels such as broadcast media be universally and equally available to all actors. This is because an informed and participant citizenry is central to the democratic process. To amplify the voices of some over others would therefore be unjust.

By shutting down independent media channels, and broadcasting news through the state broadcaster alone, Kenya’s government unjustly silenced the voice of the opposition.

Peace and security are preconditions for a just and civilised society. But law and order can be ambiguous: they can refer to cohesion and harmony but they can also invoke the notion of control. Control suggests a hierarchy, and subordination of the weak by those in power.

Kenya’s Interior Cabinet Secretary Fred Matiangi appears to have relied on the notion of control when he ordered the media shut down.

Kenya’s constitution guarantees freedom of the media. It stipulates that the,

Freedom and independence of electronic, print and all other types of media is guaranteed … and the State shall not exercise control over or interfere with any person engaged in broadcasting, the production or circulation of any publication or the dissemination of information by any medium; or penalise any person for any opinion or view or the content of any broadcast, publication or dissemination.

But the same Constitution states that these freedoms do not apply to those who promote propaganda for war, incitement to violence, hate speech, or advocacy of hatred.

The problem is that the State made no attempt to assert that the three broadcasters acted beyond this constitutional mandate. By shutting them down it breached the notion of order.

The media shut down points to the kind of political repression that does not auger well for democracy. By doing it, Kenya’s government rolled back much of the democratic space that Kenyans fought so hard to achieve.

This article was originally published on The Conversation. Read the original article.